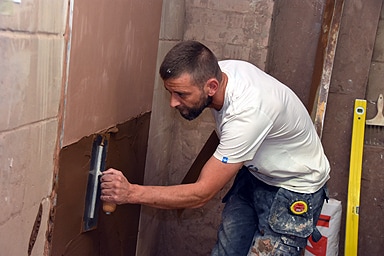 It took most of the day to level the wall, set out the area to be plastered, mount the borders and then to plaster and finish the wall to a highly smooth standard.  All the competitors did a marvellous job and enjoyed seeing another college and how they matched up against the opposition. 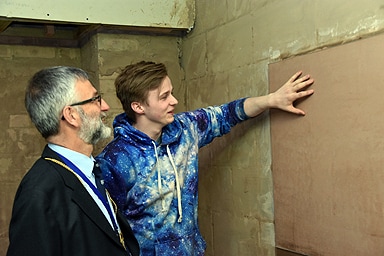 The following students represented their colleges in the Plastering Competition: 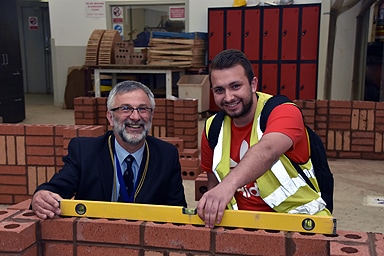 The following students represented their colleges in the Bricklaying Competition:

The Incorporation would like to express their thanks and gratitude to the three colleges for organising and judging these competitions especially when staff is so busy working exceptionally hard to ensure the success of as many students as possible.   Special thanks go to David McLaren of South Lanarkshire College who co-ordinated the arrangements, to Allan Sinclair from Kelvin College for arranging the accommodation and materials and to John Brown for his untiring assistance.   Without the help of the above and lecturing and support staff the Incorporation would not be able to enjoy supporting the students, staff and colleges.

Lastly, a special mention must be made of the students; they had all volunteered to take part in the competitions to increase their skills.   The winners of the competitions will be attending the Deacon’s Choosing Dinner with a partner of their choice as guests of the Incorporation of Masons where they will both receive a cheque to the value of £100, a certificate, a golden medal and the praise and acclimation of those lucky enough to be at the Dinner.
Credits: The Incorporation of Masons is delighted to acknowledge the help and assistance given by George Mahoney, Photographic Lecturer and Graeme Hamilton, student
both at John Wheatley College, Glasgow in photographing most of the items on the website.