Deacon John Brown welcomed his guests to his Choosing Dinner. 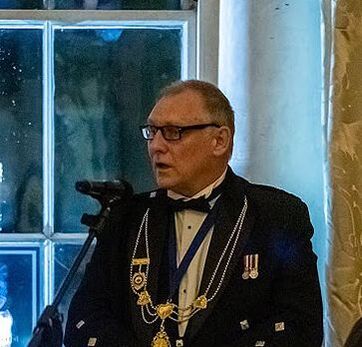 Deacon John Brown
The Deacon's Choosing Dinner was a resounding success with approximately 154 people present to celebrate the election of John Brown to the highest office in his craft.   Deacon John had the Master of the Worshipful Company of Masons of London, Chris Radmore and his wife plus the Master of the Worshipful Company of Tilers and Bricklayers, Leslie May and her husband Malcolm as guests at the dinner.

Prior to the Dinner, Deacon John introduced his top table and guests followed by Collector Grant Macleod saying the Grace prior to enjoying the excellent dinner. 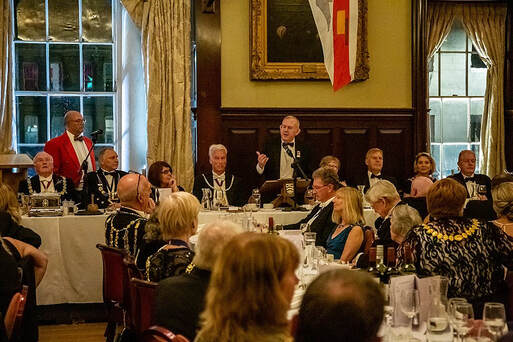 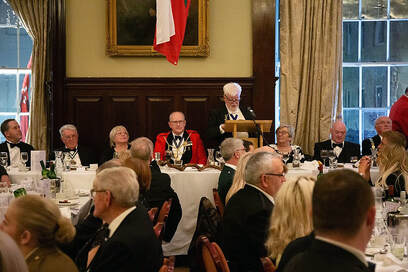 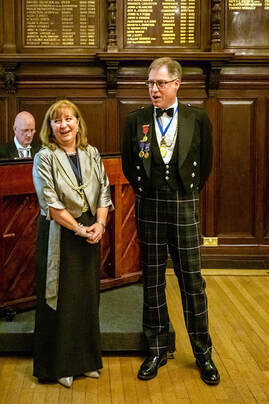 As the visitors leave they are obliged to sing a short chorus rom "Will ye no come back again" and the worse singers receive the wooden spoon at the end of the year. 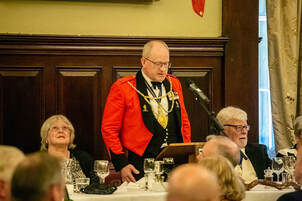 Major Gavin Queen, Deacon of the Fleshers.
The next toast was to the Trades House of Glasgow and it was delivered by Major Gavin Queen who is also the Deacon of the Fleshers.   He made a very impassioned toast focusing on the history of the Trades House and their historical connections.   His speech went back to the 1600s and carried on right up to date commenting on the connections that many of the Incorporations have with the military. 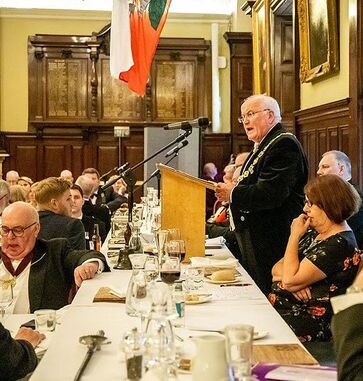 The reply to the toast to the Trades House was made as is tradition by Deacon Convenor Tom McInally.   Tom reminded all present of the work carried out by the Trades House on the assisting schools and colleges to achieve the maximum for their pupils and students.  He also mentioned three essential elements for young people to succeed:  Skills, Standards and Social Responsibility and how the Trades House and the Incorporations were assisting in the achievement of these aims.

He noted with a degree of pleasure that the Trades House had been awarded the Lord Provost Award for Charity this year and thanked all who had made this award possible.   The Deacon Convenor also mentioned with obvious pleasure that the Incorporation of Maltmen had enrolled their first lady members. 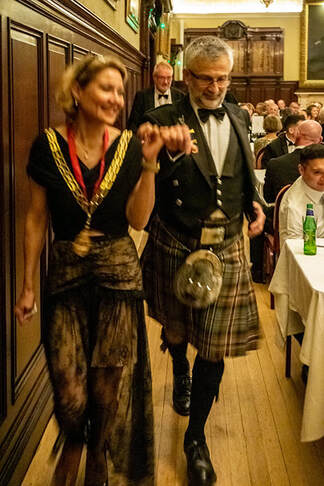 The next piece of entertainment was to be another visitation and this time from the Incorporation of Wrights.   Past Deacon Gordon Weetch escorted the Deacon of the Wrights into the hall holding pinkies.   The tradition is that both parties should link right pinky to right pinky as this would prevent either party drawing a weapon and injuring the other.

As normal pleasantries and gifts were exchanged with the Deacon of the Wrights passing over a Bob the Builder hard hat and tools, an Idiots Guide to Building , Safety Glasses with wipers and a bottle of whisky.   Deacon john Brown replied in like with similar amusing gifts before the Wrights moved to the piano to sing "Yes we will come back again". 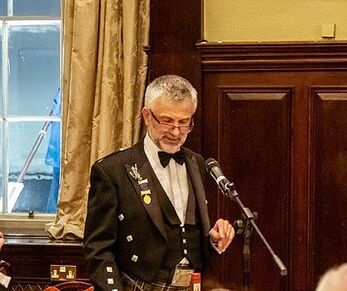 Past Deacon Gordon Weetch, toasting the new Deacon.
As is traditional in the Incorporation of Masons, the Late Deacon toasted Deacon John Brown commenting on how he and the Master Court believed he would make an excellent Deacon and outlining his attributes.

Deacon John replied and also thanked all who had made the evening possible.

​Past Deacon Ian Macpherson was the most senior Deacon present, but as he was attending as the Visitor of the Maltmen, Past Deacon Jack Steel "Rapped the Shed" prior to the singing of Auld Lang Syne.