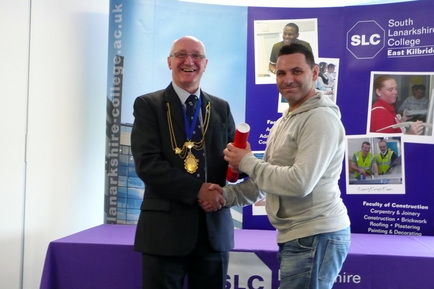 The drawings for the competition were designed by David McLaren of South Lanarkshire College and stretched the pre-apprentices.   It was wonderful to see all the young people putting their all into the competition, working out how to built the structure and doing so with great care and precision.

City of Glasgow College and South Lanarkshire College had students representing them and all could hold their heads up high at the end of the competition.

The judges found choosing the final winner a very difficult task, but eventually Andrew Airns of City of Glasgow College was just ahead of the others.

Andrew is an ex soldier of the Kings Own Scottish Borderers and has enjoyed the opportunity to retrain as a bricklayer, his newly chosen career.

Andrew will be attending the Incorporation's Deacon's Choosing Dinner on 19th September as part of the prize for winning the competition.
Credits: The Incorporation of Masons is delighted to acknowledge the help and assistance given by George Mahoney, Photographic Lecturer and Graeme Hamilton, student
both at John Wheatley College, Glasgow in photographing most of the items on the website.