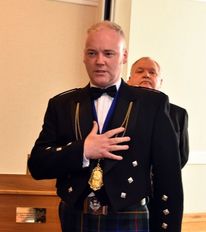 The main interest of the evening was "what would the Deacon place in the Box to mark his year?"

Soon they were to discover the items that he placed in the Box, they were:
a red London double Decker bus which represented one of the most memorable events of his year to date when the Chain Gang took part in the Lord Mayor's Show.

The second item was a Wright's book which commemorated him joining the Incorporation of Wrights and hopefully building on the good relationships between the two crafts.

The third item placed in the box was the menu from his Choosing Dinner, which he enjoyed tremendously even though it was the first Deacon's Choosing Dinner that he had attended.

But prior to placing the items in the Box the two Key Masters had to open the old and new box.   The old box is an early Charter Chest used by the Incorporation since 1674 and the new box was one presented by a Pasty Deacon in 2015 during his year in office as the old box was full.   The Charter Chests used to hold the money and legal documents of the Incorporation at a time when there were no banks.   The Deacon kept the box in his home and did not have a key, whilst the two keys were held by two Key Masters.   This prevented the possibility of a dishonest Deacon from tampering with the contents. 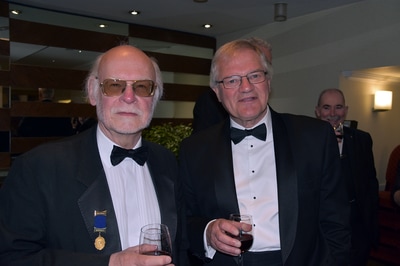 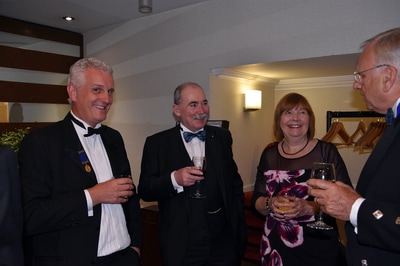 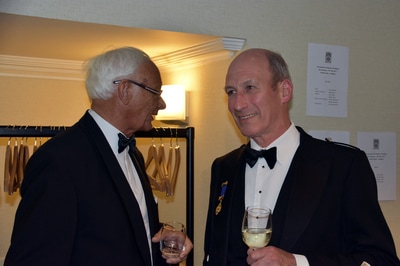 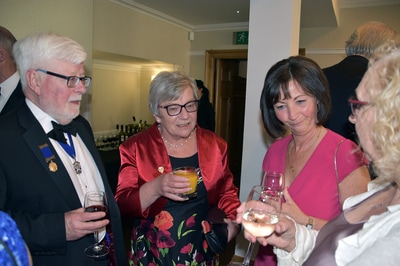 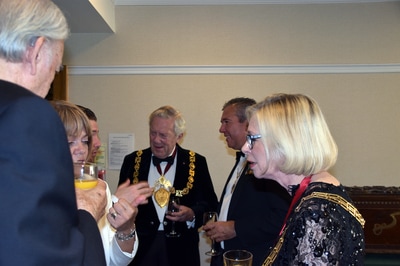 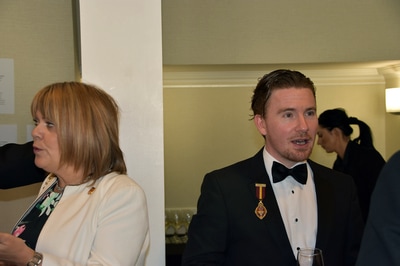 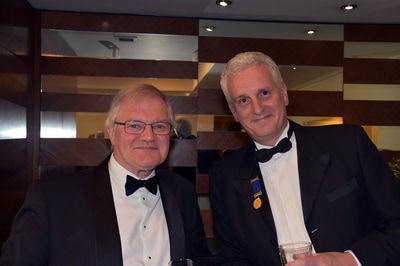 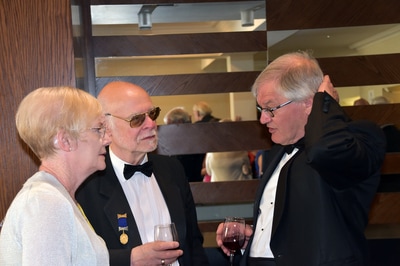 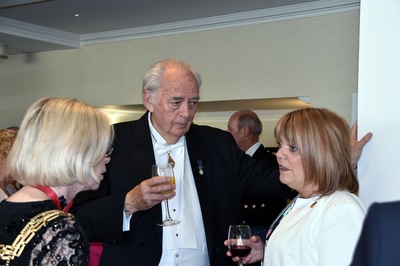 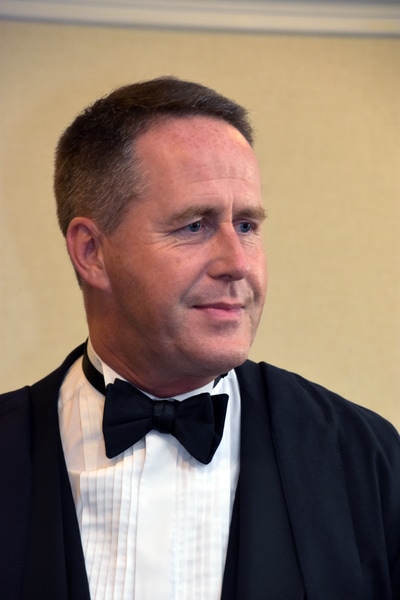 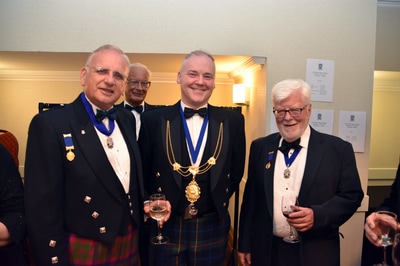 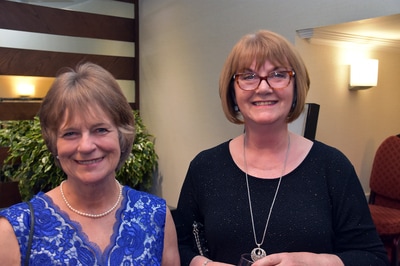 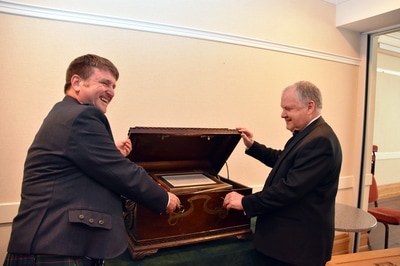 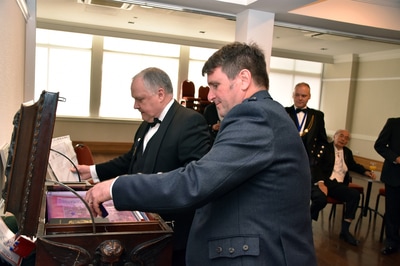 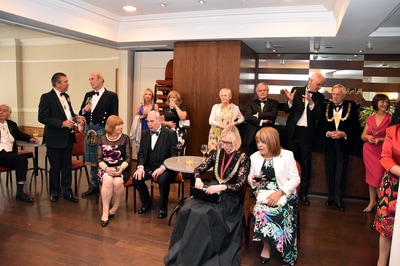 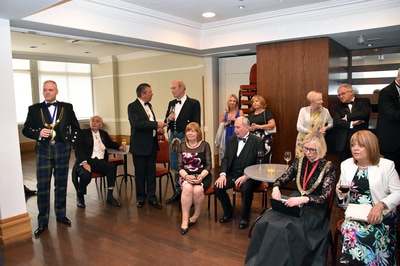 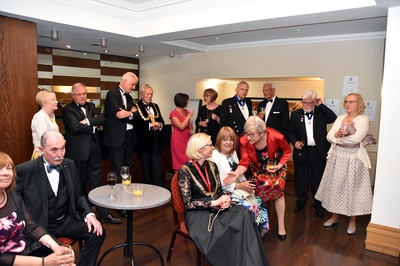 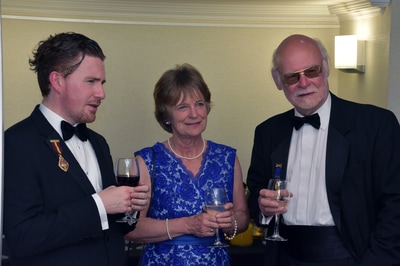 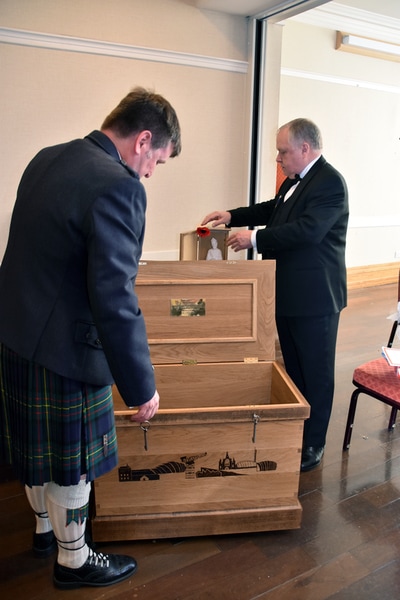 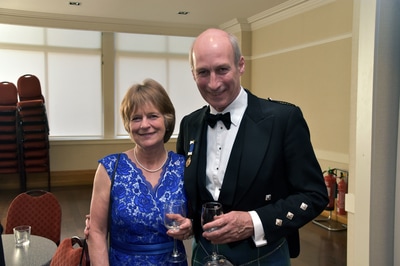 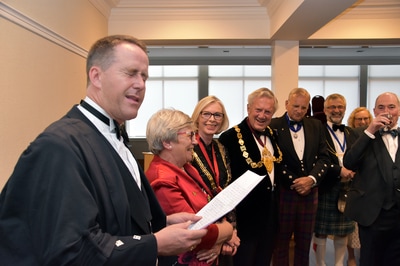 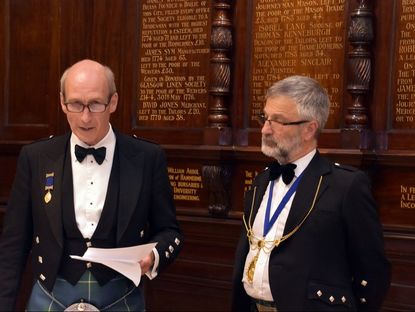 Cameron Nixon is a Scots singer, fiddler and composer and we were fortunate to hear him sing one of his own lovely songs and play the fiddle.

Cavin comes from Selkirk in the Borders and has played the accordion from a very early age, which was quite apparent from his superb skills.

Both young men were superb and gave renditions of a wide variety of music which was appreciated by those lucky enough to be present.
​ 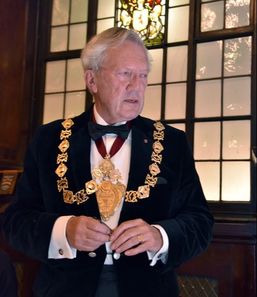 Late Collector David McLaren gave an excellent toast to the Incorporation of Wrights where he outlined his wish to work in close friendship and harmony with them.   The reply was given by Deacon Dorothy Newlands of Lauriston, Deacon of the Wrights.   She also made it clear that the Wrights were delighted to work closely with the Merry Masons and was most complimentary towards the Incorporation of Masons.

The final speech was by David Bannerman who praised the Deacon and the good work that he had been carrying out as ambassador of the Incorporation.

Lastly, Jack Steel closed the evening by "Rapping the Shed" as the most senior Deacon present.
Credits: The Incorporation of Masons is delighted to acknowledge the help and assistance given by George Mahoney, Photographic Lecturer and Graeme Hamilton, student
both at John Wheatley College, Glasgow in photographing most of the items on the website.