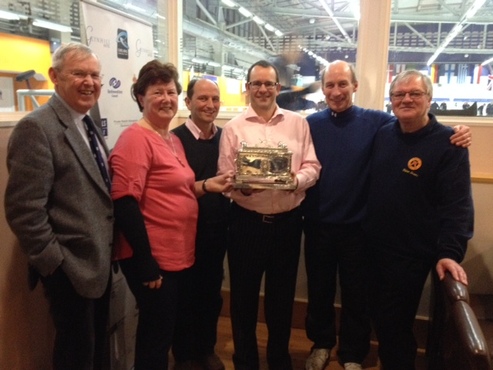 The Masons, skipped by Doug Kerr with Past Deacon Iain Smith at three, his brother Gavin at two and lead Late Deacon Brian Evans had a tight game, but ultimately a win over the Hammermen in the final of the Trades House Curling Competition at Braehead on Monday the 24th of February, 2014. The Hammermen were skipped by Don Rutherford with Iain Hamilton at three, Maggie Rutherford at two and Jim Inglis leading.

The Masons had to overcome the Bakers, Tailors and Gardeners to get to the final and the Hammermen had to beat the Coopers, Weavers and Fleshers along their road.

The final was a close run thing, and there were many good shots from both teams in the early ends with the Hammermen blanking the 3rd and 4th whilst looking for their two. Unfortunately when the two came it went the Masons way. A fight-back from the Hammermen made the score at the 6th end 3-4, but with last stone at the 7th, the Masons took a 3, and the game was over. Both teams shook hands with the Masons the winners by 7 shots to 3.

Congratulations to the Coach, Past Deacon Stuart Orr and his Mason's Team – and hard luck to the Hammermen, who no doubt will feature in the final games of next season’s competition which will start in October 2014.   As always the Masons team consisted only of members of the Incorporation of Masons.

In another little twist the Final took place on the same day as the 92nd birthday of the former Curling Convenor Jimmy “the pie” Smith who is, of course, Iain and Gavin’s dad. He was reportedly delighted.