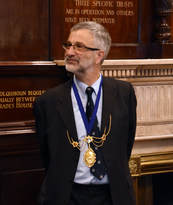 Collector Gordon Weech about to say Grace.
The Pear Eating evening is the final event in the Deacon's calendar and takes place on the evening prior to the new Deacon being sworn in.  The Saloon in the Trades Hall was crowded by Merry Masons and guests.   This year the Keith Brown the Deacon Convener, Tom MacInally the Collector of the House and Peter Clark the Master of the Worshipful Company of Masons of London were all present and ready to enjoy a rather unique experience.

This being Deacon Gary Smith's final event, he was in good form and ready to enjoy the rustic fare and home grown entertainment that was about to commence.   Prior to the  meal Collector Gordon Weech said Grace.   The meal consisted of sandwiches, sausage rolls and spring rolls all washed down with either a fine wine or a bottle of beer.   As this was the Pear Eating evening, ample supplies of luscious pears were available for all on the table. 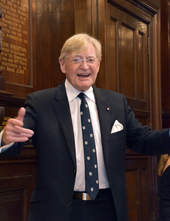 Prior to his singing, Ian explained the origin of the songs that he was about to sing, this gave a context and made it all the more entertaining.

Ian had arranged the entertainment for the evening and it was made up solely from members of the Incorporation of Masons who have an abundant supply of entertainers. 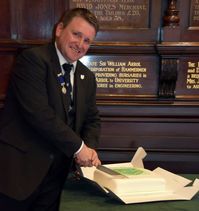 The cake had been made by students at South Lanarkshire College, where David is the Deputy Head of Faculty of Construction.

All present enjoyed the cake. 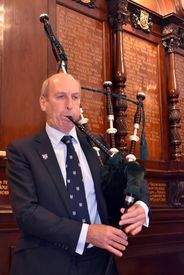 Past Deacon Ian Smith's selection was one suitable for all as he had chosen Caledonia and Marie's Wedding. 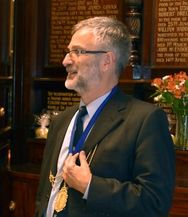 As the new Collector was unwell, Gordon had agreed to carry on with his roll until the Collector was well enough to take over her duties.

Collector Gordon gave a heartfelt reply and it boads well that he will make a great Deacon in the future. 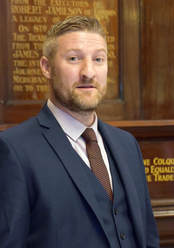 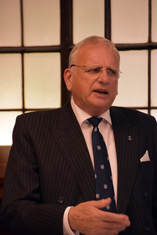 The story has been passed down from generation to generation in the Incorporation and Jack had the pleasure of telling all present about the history of the event.

To see and hear Jimmy the Pie as he was known, please click HERE,  you can also here Ian Macpherson singing one of his ditties at this location also.   Please scroll down to see the video of interest. 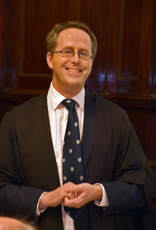 Clerk Tom Monteith delivering his rhyming couplet
The Deacon gave a toast to the Clerk highlighting his numerous attributes as Clerk.   Without Tom Monteith, the Clerk, the Incorporation would not be as effective and forward moving as it is.   It is his guidance and advice that has for many years guided and supported numerous Deacons in their roll.

Clerk Tom Monteith then made a fantastic reply as is normal for him.   He commented on the uniqueness of the Incorporation and the Pear Eating.

He then delivered what we all consider to be a poem about the Deacon, but he insists is a series of rhyming couplets.   As usual this was a delight to us all and Deacon Gary Smith was delighted with the resume of his year as Deacon. 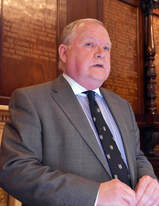 Past Deacon David Bannerman toasting the Deacon.
As is tradition, at the end of every meeting, the Late Deacon says a toast to the present Deacon, congratulating him on his control of the meeting.

Late Deacon David Bannerman gave a short and humorous toast to Deacon Gary Smith commenting on his abundant use of the word "ERUDITE", claiming that he thought that he had said "ARALDITE" and couldn't understand why he was referring to a glue! 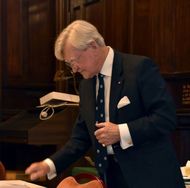 The tradition goes back to the time when Stone Masons used to work in a shed, cutting stone for Cathedrals or other buildings and when it was time to stop, the Master Mason would rap the shed to the tune of "Stop Stop Stop, All The Masons In The Shed, Stop Stop Stop", with one rap per word.

To see and hear Past Deacon James Hamilton Smith rapping the shed and telling the story of the tradition, please click HEAR.
Credits: The Incorporation of Masons is delighted to acknowledge the help and assistance given by George Mahoney, Photographic Lecturer and Graeme Hamilton, student
both at John Wheatley College, Glasgow in photographing most of the items on the website.