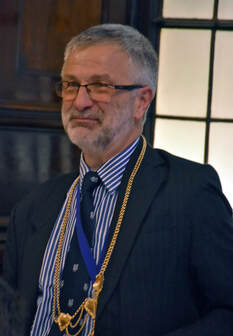 The Pear Eating, being the last event in the Trades House, excluding the election of the Deacons on the Friday morning, is a very special event in the Calendar.   Prior to the meal the Collector David Taylor said Grace before the host enjoyed the rustic fare which had been provided.  Wee pies, sausage rolls, quiche, sandwiches and cake made up the delicacies which was washed down with beers and wine. 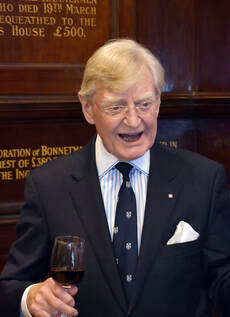 Ian Macpherson leading off the singing
As is the way with the Merry Masons, entertainment for this event is supplied by the members of the Incorporation.   Ian Macpherson had organised a grand selection for our enjoyment.   As Ian had organised the entertainment he led off the singing with a few of his and the audiences favourite songs such as San Francisco and Side by Side with a slightly different slant from normal. 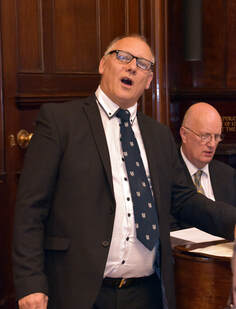 Be Sir John Brown giving the Be Sir song laldy.
The Deacon praised the Besir and thanked him for all his help during the past year and looked forward to seeing him lead the Incorporation as Deacon from Friday and the rest of the year.

Be Sir John Brown, made a heart felt reply to the Deacon's Toast and thanked him for his kind words.   The explanation of the expression "The Be Sir" was explained for the benefit of those who had not heard the story.

The Be Sir is an appointment in the Incorporation of Masons which lasts from the Pear Eating evening until s/he is elected as Deacon.   It comes from the expression, "The Deacon to Be Sir​". 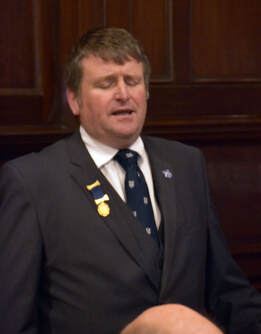 Late Deacon David McLaren singing Caledonia
Late Deacon David McLaren entertained the company by singing Caledonia.
​
Ex Deacon Convenor David Dobson next informed the meeting of the Merry Masons' success in the Trades House Curling Competition.   The team this year consisted of Iain Smith, Gavin Smith and David Dobson's grandson who is likely to be the youngest person to have his name engraved on the trophy.   It is rumoured that he was a bit miffed at not getting a share of the wine that the prizewinners received, hopefully he will in a few years time.
​ 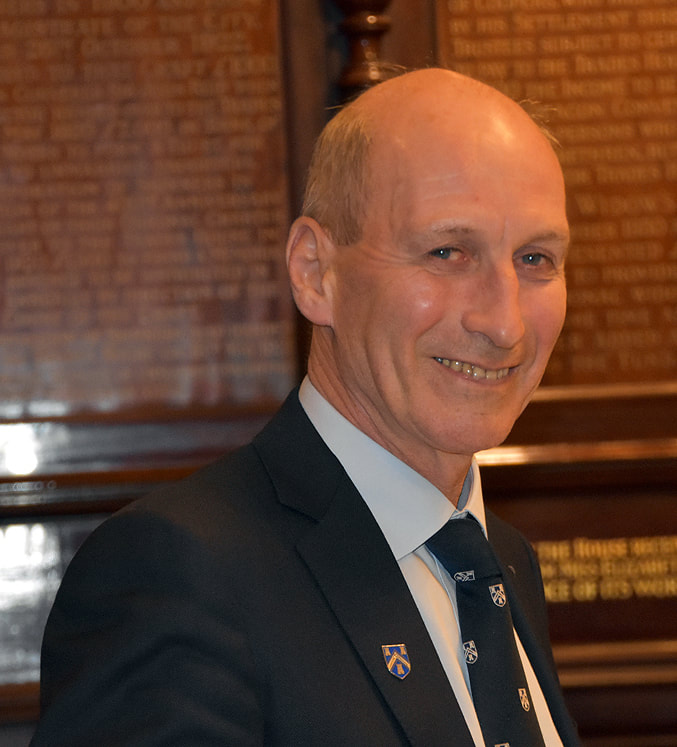 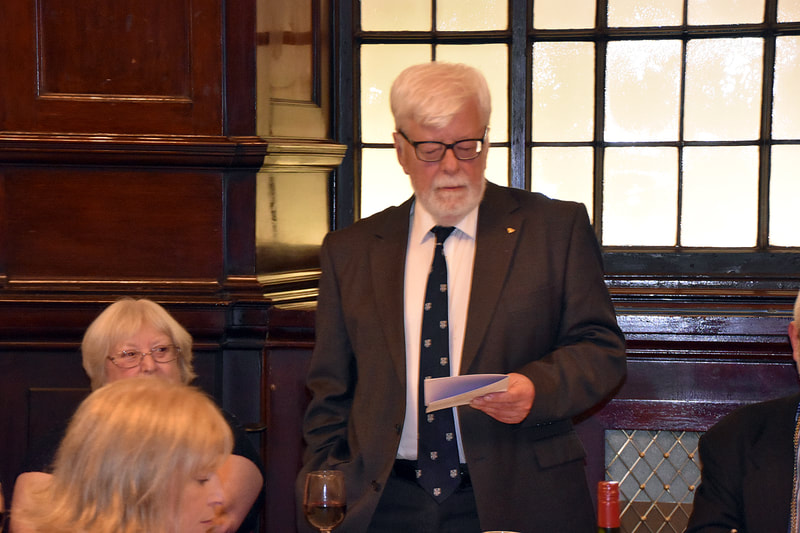 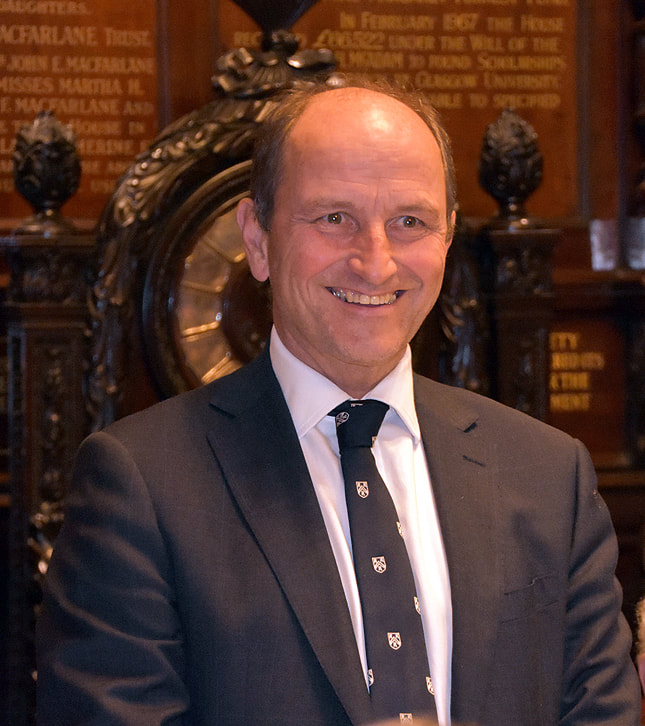 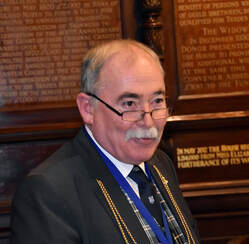 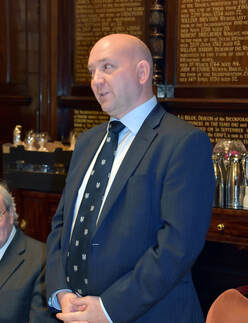 ​Craig gave a short and modest response to being welcomed as a new member of the Master Court. 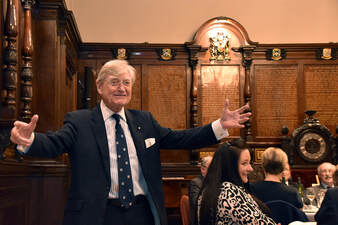 Ian Macpherson leading the singing
The next entertainment was the popular sing-along, led by Ian Macpherson.   Song sheets were issued and encouragement was given so that everyone would sing their hearts out.   There was no fear that those attending would not sing along, the rafters fare shook with the strong voices singing the old favourites of the Merry Masons.

​After six great songs, it was time again to whet the whistle before the next phase of the evening. 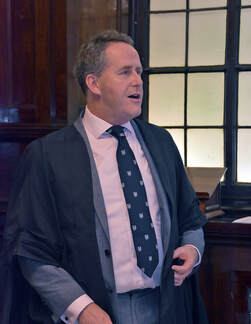 Clerk Tom Monteith reciting his poem.
The Incorporation of Masons are fortunate in having an excellent Clerk and the Pear Eating is a time when the Deacon has the opportunity to express his thanks publicly to the Clerk for all his hard work and guidance over the year.

Our Clerk, Tom Monteith gave a superb response as usual which was amusing and entertaining.   At the end of his reply to the Deacon's Toast, Tom recited a poem (or as he prefers to call it, a series of rhyming couplets) about the Deacon's Year.   As always this was most entertaining and enjoyed by all present.

One piece of sad news was given by Tom when he informed the audience that George Snowdon, the previous Clerk had passed away the preceding Sunday. 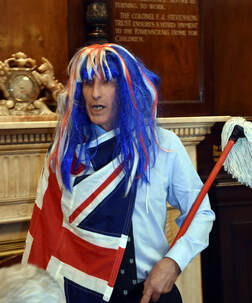 Everyone joined in this great song with gusto.

As the evening was now drawing to a close, Late Deacon David McLaren made a toast to the Deacon as is tradition at the end of each meeting of the Incorporation.

He also thanked Ian Macpherson and all who helped to entertain the host, not forgetting Liam Devlin for his magnificent work on the piano, trying to keep the entertainers near to the key that suited them best. 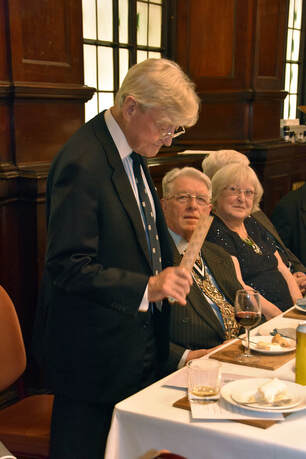 Ian Macpherson "Rapping the Shed"
As is tradition, prior to singing "Auld Lang Syne", the most senior Deacon present was asked to "rap the shed".   This honour was taken up by Iain Macpherson this year and prior to "rapping the shed" he informed everyone of the history of the rapping.
​
Credits: The Incorporation of Masons is delighted to acknowledge the help and assistance given by George Mahoney, Photographic Lecturer and Graeme Hamilton, student
both at John Wheatley College, Glasgow in photographing most of the items on the website.