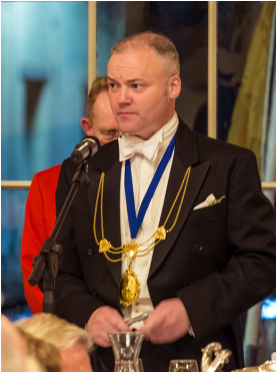 Deacon Gary Smith
The Deacon's Choosing Dinner is a very important date for all members of the Incorporation.   This will be the first opportunity the members will have had to see the new Deacon in action.   It is also the day when we present prizes to our numerous prize winners who arrive bedecked in all their glory.   The Incorporation pay for the prizewinners dinners, drinks and also the hire of a dinner suit or highland attire.   Each prize winner is entitled to bring along a guest of their choosing.  Parents and employers also join us to congratulate the winners at thi very prestigious event.

Deacon Gary Smith held up the traditions of the Incorporation and was a fine sight to see in white tie and tails.   All of the other Incorporations were present to support him as the Masons always hold their Choosing Dinner first, on the actual day when the new Deacons are elected.

Unfortunately our oldest and most senior Deacon, James Hamilton Smith was not well enough to join us at this dinner as it would have been a special evening for him and the Incorporation of Masons.   Jimmy had attended his Deacon's Choosing Dinner, 50 years ago as he had been elected Deacon in 1966.   Everyone wished Jimmy all the best and looked forward to seeing him at the Deacon's Choosing Lunch in a few weeks time where we hoped to have the opportunity in celebrating his Golden Jubilee. 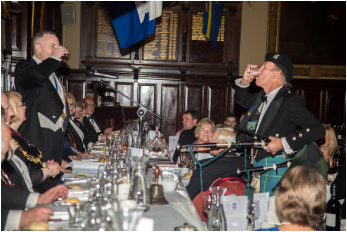 Deacon Gary Smith and Past Deacon Iain Smith having a dram in payment of the piping.
Deacon Gary Smith wasted no time in welcoming his guests and calling Past Deacon Iain Smith forward to thank and pay him for his excellent payment.   Tradition has it that the piper is paid in whiskey and so both drank a toast and in age old tradition, Iain upended his empty glass on top of his Glengarry to prove that he had fully quaffed his toast to the new Deacon.. 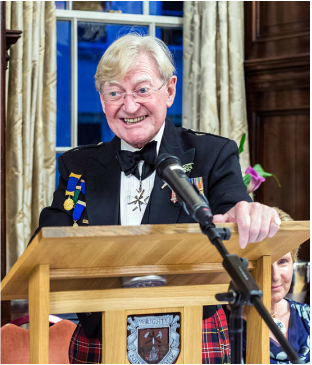 Past Deacon Ian Macpherson giving a humorous and informative toast to the Incorporation.
The meal at the Deacon's Choosing Dinner was wonderful and all of the company enjoyed it.   Prior to the meal Late Collector David McLaren said grace.

After the meal the Toast commenced with a toast to Her Majesty the Queen and this was followed by a toast to the Incorporation of Masons by Past Deacon Ian Macpherson.   Ian gave an excellent toast and explained about the history of the Incorporation and the part it had played in the development of the City of Glasgow.

Both did a grand job and the evening was off to a terrific start.

After the Interval the Deacon presented prizes to our super young prizewinners.  Most had never visited the Trades Halls and were very impressed by the ambiance of the surroundings.   Each prizewinner received a Cheque, a Lady McDonald Medal, a certificate and a trophy.   All of this on top of the dinner etc. 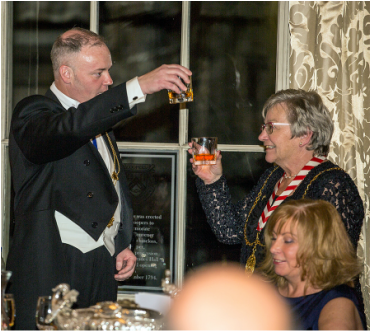 Deacon Gary Smith toasting Deacon Jan Dobson of the Barbers.
The next piece of entertainment was a visitation from the Incorporation of Barbers.  The reason behind the visitation is to enable another Incorporation to examine the accounts of the Incorporation and to comment on them.   Deacon Jan Dobson reported that the Masons' accounts were doing well and so was our recruitment.   We also, as is normal with the Incorporation of Masons, had a full Master Court and a waiting list for next year.   Deacon Jan presented fitting gifts to our Deacon and he reciprocated.   As the visitors left they had to undergo being sung out to "Will ye no come back again".  They then had to sing back the second verse, "Yes we will come back again".

At the end of the Deacons' year the Collector of the House has to judge which of the Deacons gave the worst rendition of this ditty.   It is sad to have to relate that in recent years one of the Masons Deacons won the green plastic spoon and the wooden spoon and he did not even sing.

​All of this is done in the very best of humour. 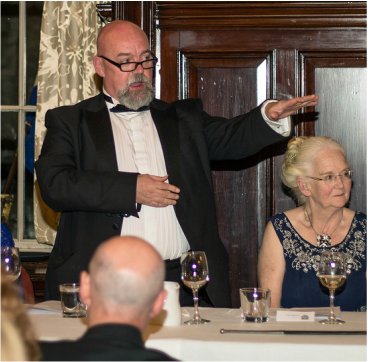 He covered our work with children in care, our support of education through competitions, prizes and generous gifts to numerous individuals and charities.   Prior to preparing his toast he said that he had been unaware of the vast charitable giving by the House and the 14 Incorporations amounting to approximately £750 00 per year.

During his toast, which was given in a quiet manner, there was not a sound to be hear in the hall.   I can say without a shred of a doubt that this was the best speech on this topic that I had heard during many year attending dinners at the Trades Hall. 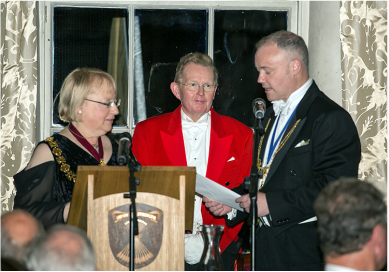 Deacon Convener Ruth Maltman thanked the Incorporation for the generous gift.
​
As the night was nearing its end, we had another visitation in the form of the Wrights.   As is normal, when asked by Late Collector David  McLaren "Can they enter?", they are met with a resounding "NO", of course the Deacon relents and we welcome our friends from the Wrights.   Once again gifts are exchanged and singing takes place, all competing not to win the Wooden Spoon.   After hearing the Wrights rendition, I am sure that they have no chance of receiving the dreaded implement. 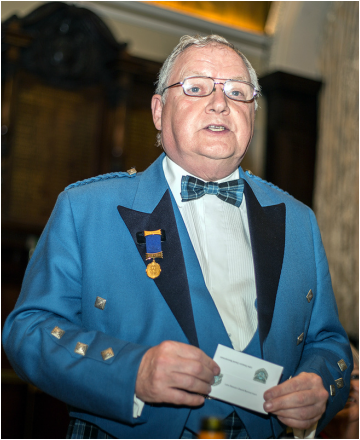 Late Deacon David Bannerman giving a vote of thanks to Deacon Gary Smith.
As is the tradition with the Incorporation of Masons, at the end of the evening the Late Deacon gives a vote of thanks to the Deacon and comments on how well he has carried out his duties.   This year David Bannerman was the late Deacon and he gave a short address on the topic and wished the Deacon well in his year to come.

Shortly after this very pleasant toast, the Deacon called on the most senior Deacon present, Past Deacon Ian Mcpherson to close the meeting by "Rapping the shed".   As the new queen was present, Ian asked the Deacon if he would permit her to rap the shed in his stead.    The Deacon agreed and the new Queen of the Masons duly rapped the shed.

Rapping the Shed is an ancient tradition and to learn more about it you will have to come to one of our evening entertainments.

The evening was closed in the usual manner with the singing of Auld Lang Syne.
Credits: The Incorporation of Masons is delighted to acknowledge the help and assistance given by George Mahoney, Photographic Lecturer and Graeme Hamilton, student
both at John Wheatley College, Glasgow in photographing most of the items on the website.