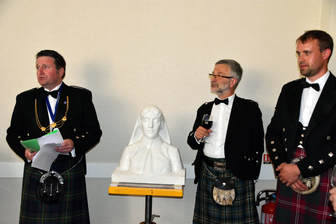 Left to Right ~ Deacon David McLaren, Late Collector Gordon Weetch and Sculptor Alistair Denovan.
The evening was well attended with a record number of diners, forty came from the Diamond Club which were Masters of London Livery Companies and the remainder were from the Incorporation of Masons with a grand total of eighty nine attendees.

The evening started with a drinks reception in the Reception Room where everyone gathered and had a chance to meet, greet and chat.   Deacon David McLaren spoke of the two wonderful busts created in Carrera Marble by Alistair Denovan who was a young stonemason and sculptor that the Incorporation had supported by commissioning the two busts from him.   Alistair then spoke of his experience in carving the busts and his visit to Italy to see the marble quarry the stone for the sculptures came from.   The trip to Italy had been sponsored by the Incorporation through a Scholarship programme which they run. 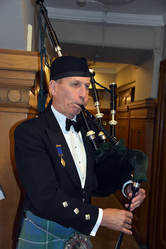 Past Deacon Iain Smith
From there we moved to the Saloon on the first floor where the Incorporation Boxes were located. 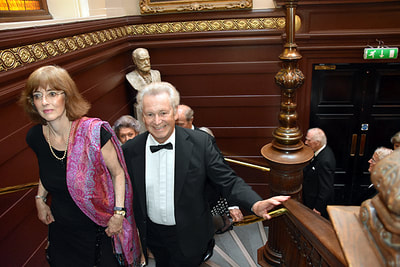 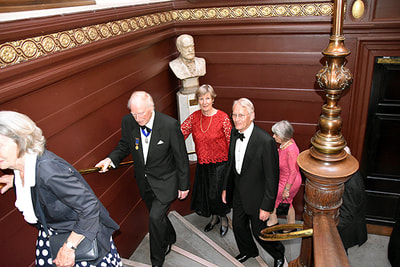 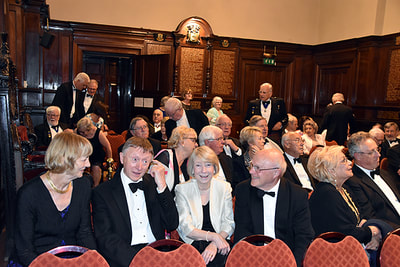 The first item on the agenda was the swearing in of new members and Master Peter Clark of the Worshipful Company of Masons of London gave his Chests and in times gone by, contained the treasures of the Incorporation such as money, deeds and valuable assets of the Incorporation.   He then called for the two key Masters to come forward and to open the Boxes for those present to inspect the contents.   Late Deacon Gary Smith and Late Collector Gordon Weech stepped forward and duly opened the boxes.   . 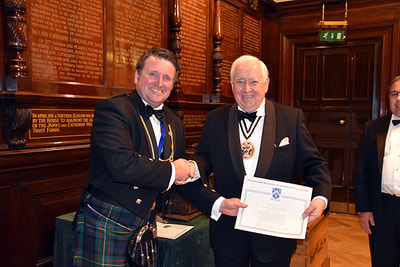 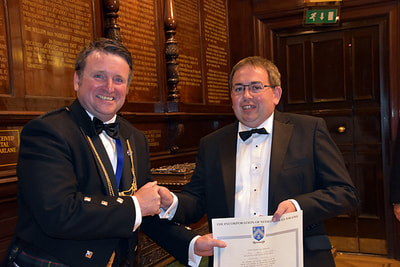 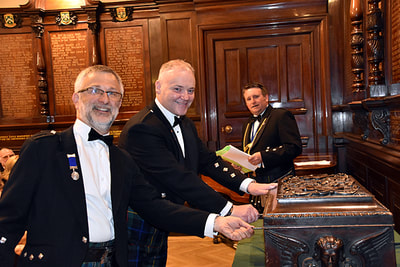 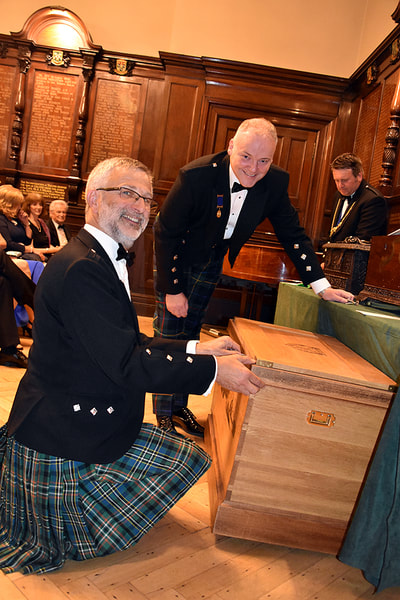 Deacon David then explained the reasoning behind the contents that he was placing in the box.   The first item was a hip flask containing some Black Bottle whisky (his favourite tipple), secondly he placed in the box a pointing trowel which represented the fact that he and the Collector, John Brown were the first in living memory who earned their keep by the trowel.   Lastly Deacon David put a Royal Engineers Cap Badge into the Box as this represented the recent affiliation of the Royal Engineers in Scotland with the Incorporation.   As a small extra, Deacon David put into the box a miniature medal and Queens jewel which Past Deacon Craig had left to the Incorporation 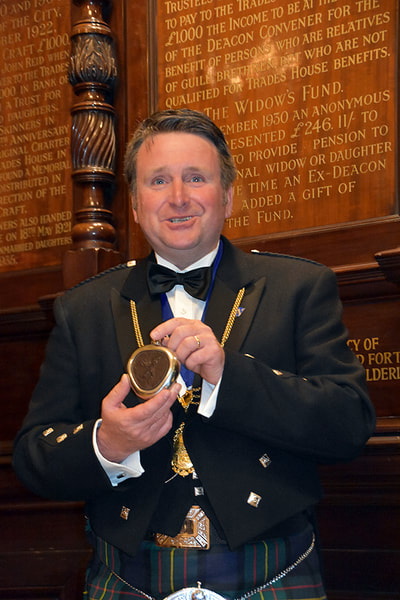 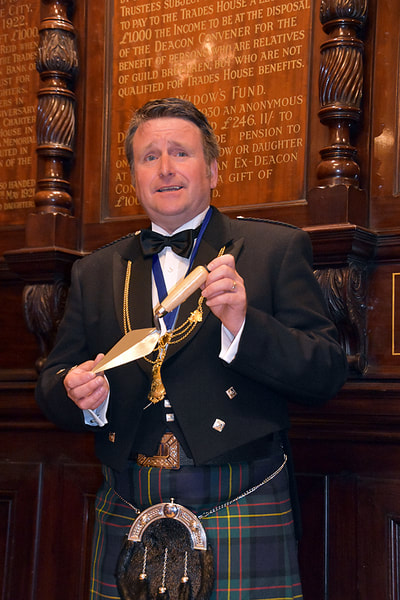 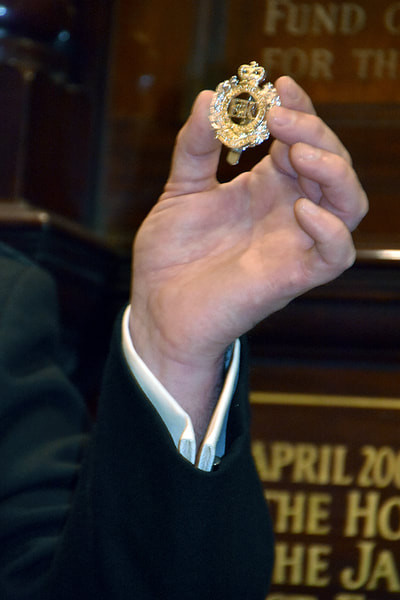 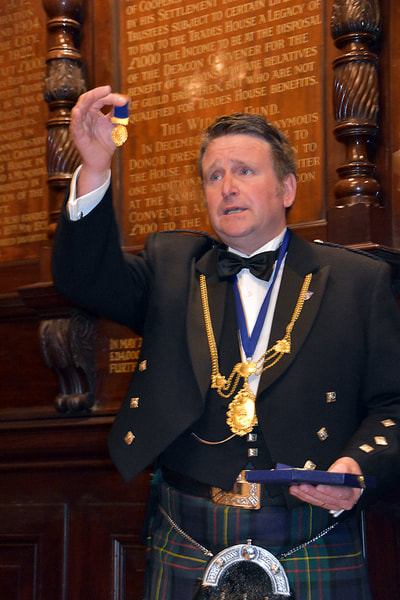 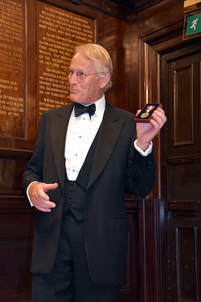 The chair of the Diamond Club was asked if he would like to place an item in the box and he was delighted to do so and placed a Queen’s Diamond Jubilee Medal into the box to commemorate their visit to Glasgow. 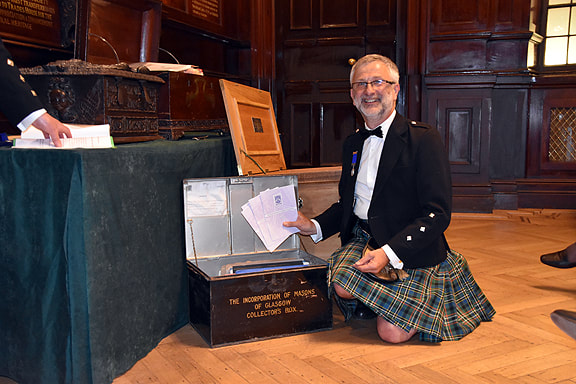 In a new tradition at the Box Opening, Past Deacon Gordon Weech placed in the Box the menu cards from the events that he had organised as Collector.

All present then had an opportunity to examine the varied artefacts that had been placed in the Box by Deacons in their day.

By this time most people were beginning to become rather hungry and were delighted to move into the Grand Hall.   Past Deacon Iain Smith led the way with a stirring pipe air.   Collector John Brown said Grace and delighted those present by reciting a Burns Grace.

The meal was to the usual high standards that we have come to expect in the Trades Hall.   During the meal, those present were entertained to the piano playing of Jonathan Buchan (Our newest member).  After the meal the Deacon called for the toast to “The Queen” which he followed with a “Toast to the Trades House of Glasgow” which Deacon Convener Alistair Dorward gave an impassioned response to.

The Deacon then called upon Collector John Brown asking “Is there any entertainment for tonight”.    Collector John Brown then introduced Cameron Nixon and Cavin Rodgers who entertained the diners with Scottish tunes on the fiddle, accordion and voice.   The two young men played wonderfully and with great enthusiasm.   They were a pleasure to watch and listen to 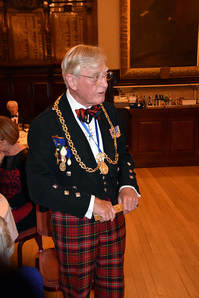